The forecast was looking light se round to sw so a decision was made to head to cacra for 12 to see what was happening and then either head up or go to another site.

22nd of September is always a key day for me to try to go flying as I had a wee prang on the 22nd of September 2002 that resulted in a helicopter ride, time off work and also my longest break from flying (6months) but that's another story...

I was last to arrive so Tommy, Dudley, Logan, Rob and Tim were in deep discussion over site choice and weather predictions. The sky looked nice too.. so we bundled into the two Landrovers and headed up to take a look. 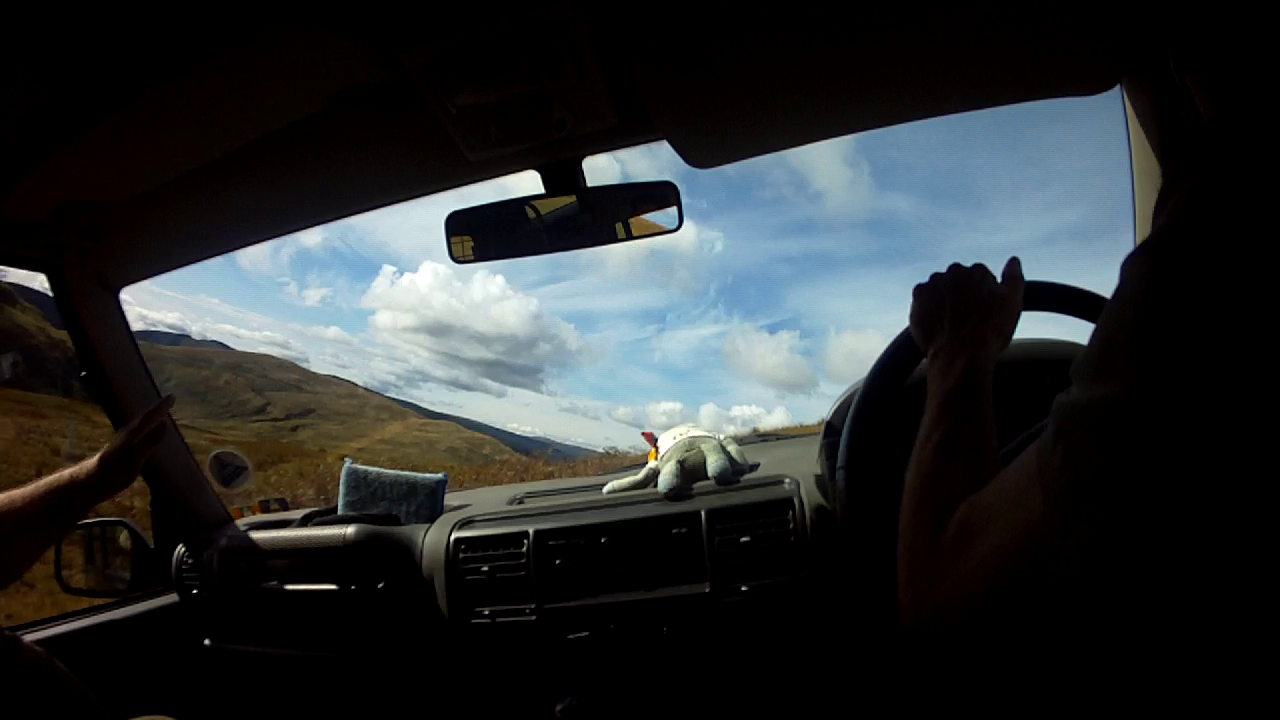 The ground was a wee bit wet so after a bit of sliding sideways in a disco we decided to walk up the last bit. Getting to the normal take off there was a nice thermal cycle coming through.

Rob, Dudley, Tommy and Tim all managed to get up and in the air before I had my self sorted.. Well I had to see if it was working ;-) 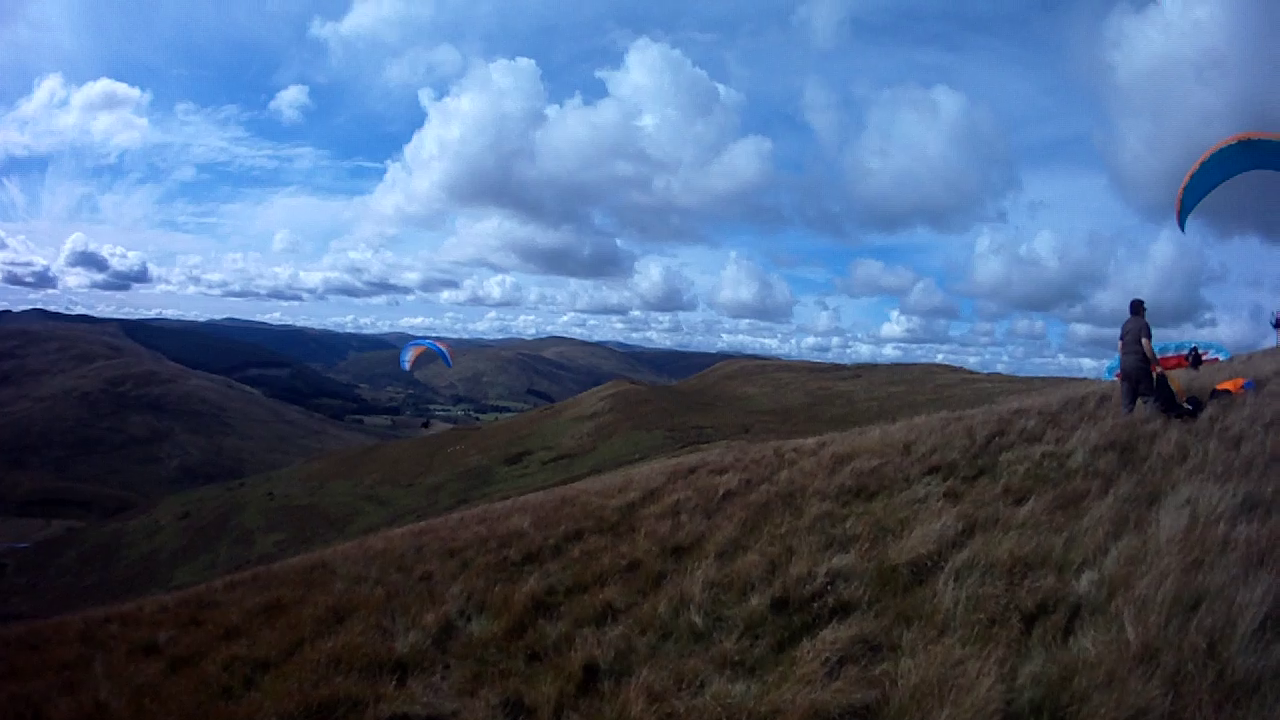 Didn't look epic conditions but we were still early on an I'd seen a RASP star rating bubble around the area appearing 2ish. Had a wee flight in an attempt at getting over the pod / feet anxiety that I seem to have at the moment. All ok but landed along the ridge. didn't matter as I'd flown and that was a good start as far as I was concerned.

Looked along the ridge and saw some birds darting about so thought... that looks promising so launched again and headed along to the west. quite lifty and got into a nice climb. Tommy joined me and we both got to 1400ft (or thereabouts according to my gps) above take off.

Dudley and Rob were circling down below but didn't connect. A bit of shading and a lack of any enthusiasm to leave the hill meant we floated about a bit until the lift restarted. Starting to really like the Team 5 Red / Zippy harness combination. I seem to be able to explore a lot more than I've been able to in the past.

Landed for some lunch and to see what the story was. Everyone seemed happy with the conditions although the sky to the south had a slight milky tinge to it.

Another wee flight was in order. Lift in a similar place but this time Dudley and Rob were connecting with it better than me. I blame the left hand thermaling as it just didn't feel right. Dudley and Rob climbed out and over the back. Dudley made it to blacknowehead then cruised along to singlie while Rob chickened out and flew back to cacra (and made it with plenty of height to spare)

The change in the sky did affect things. The thermals became fewer and further between (but were still there) and it became more of a dynamic soaring day with occasional thermic top ups.

Logan got save of the day. He was seen heading down on what looked very much like a top to bottom. From take of he had actually disappeared from sight! but then hit one of the small rocket thermals and was up above the ridge in no time at all. 6 up for the last bit which definitely looked rocket propelled from where I was standing at the time.

By 4.30 we were all starting to think about heading down. It was still flyable but we were starting to see equipment failures... 3 varios and one radio with flat batteries (I think) and we also wanted to know where Dudley had got to.

Tim flew down first then myself and Rob. all down safe. Logan and Tommy headed back to the Landrovers abandoned earlier on the hill.

The fun then started as I was packing stuff into the car... car keys were placed in the boot then boot lid closed and auto locked. DOH!

Dudley had been picked up and made it back around then so... I cadged a lift back up the hill to see if I could Phone to get keys rescued by RAC or Mia.

6pm. phone signal next to dudleys landrover. 6.20 Tommy drives off and so does phone signal! didn't know two landrovers parked 20ft appart would work as a signal amplifier but guess it must do. Either that or there is something dodgy about tommy's disco....

While I wandered round the hill dudley started poking at switches in his disco 3. then set of up the steepest part of the hill. and the truck slowly climbed up it! 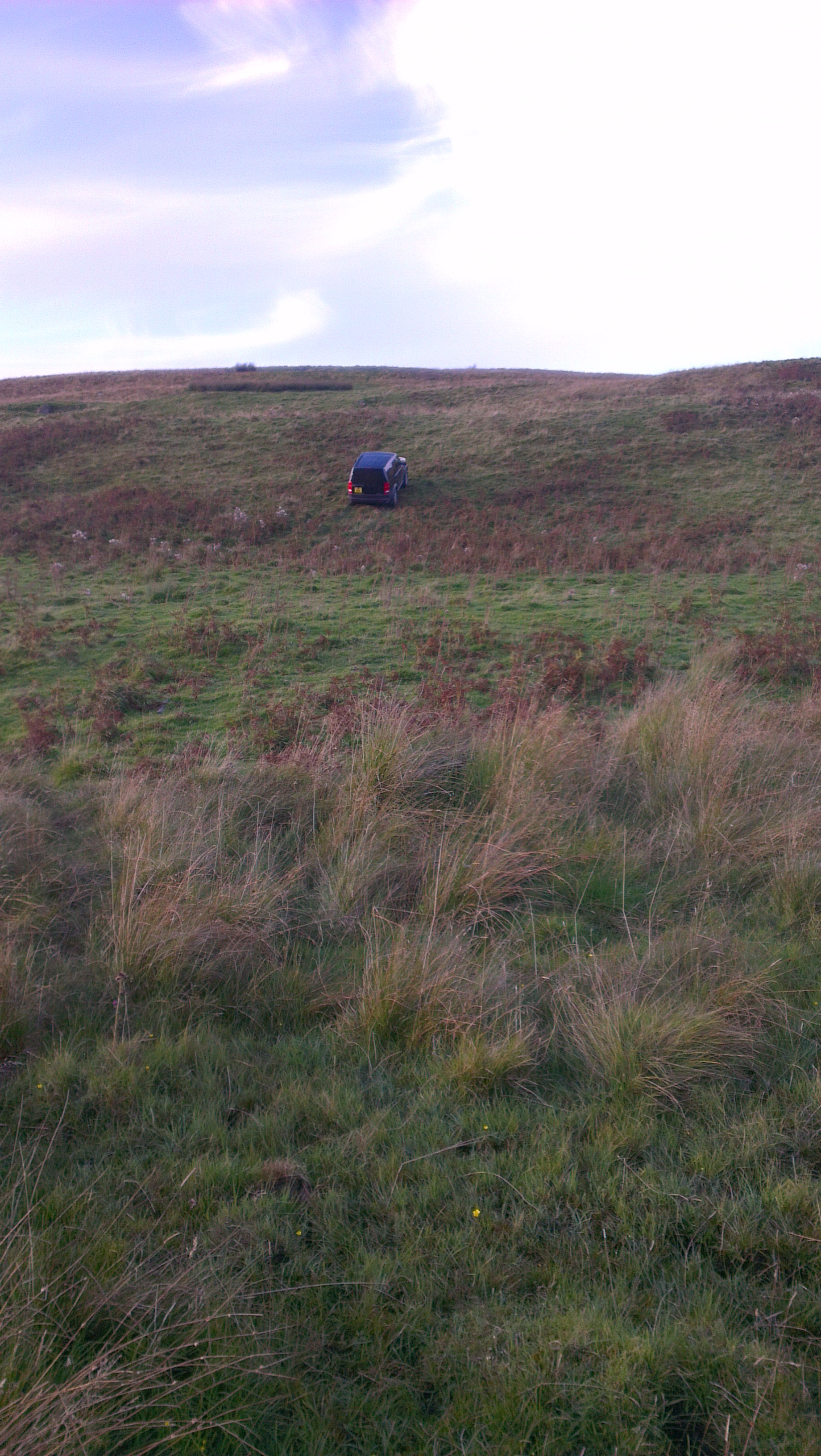 so the search for a phone signal continued.

A cracking days flying (Neil... where were you you'd have loved it) spoilt slightly by the keys but thanks go to everyone for making such a great day and for all the assistance as things got cold and very dark.

Yes it was an interesting day in many ways. Felt very much like spring conditions small bullet thermals (one of those saved my bacon)  and large areas of broken lift but once you got above a certain height things tended to smooth out.  Batteries in the vario went dead in mid air so was flying without one for the latter part of the day (5p's).  Its been a long time since I have flown without one.  wasnt too much of a problen as you could use ground references, other pilots and the pressure in the harness to detect a gain in altitude, just meant it was more difficult to use the weaker bits of lift effectively..  Pretty breezy at times giving an opportunity to practice stronger wind takeoffs and top landings.  A gem plucked out of the mess of weather we have been having this year.

Logan's video of the day: