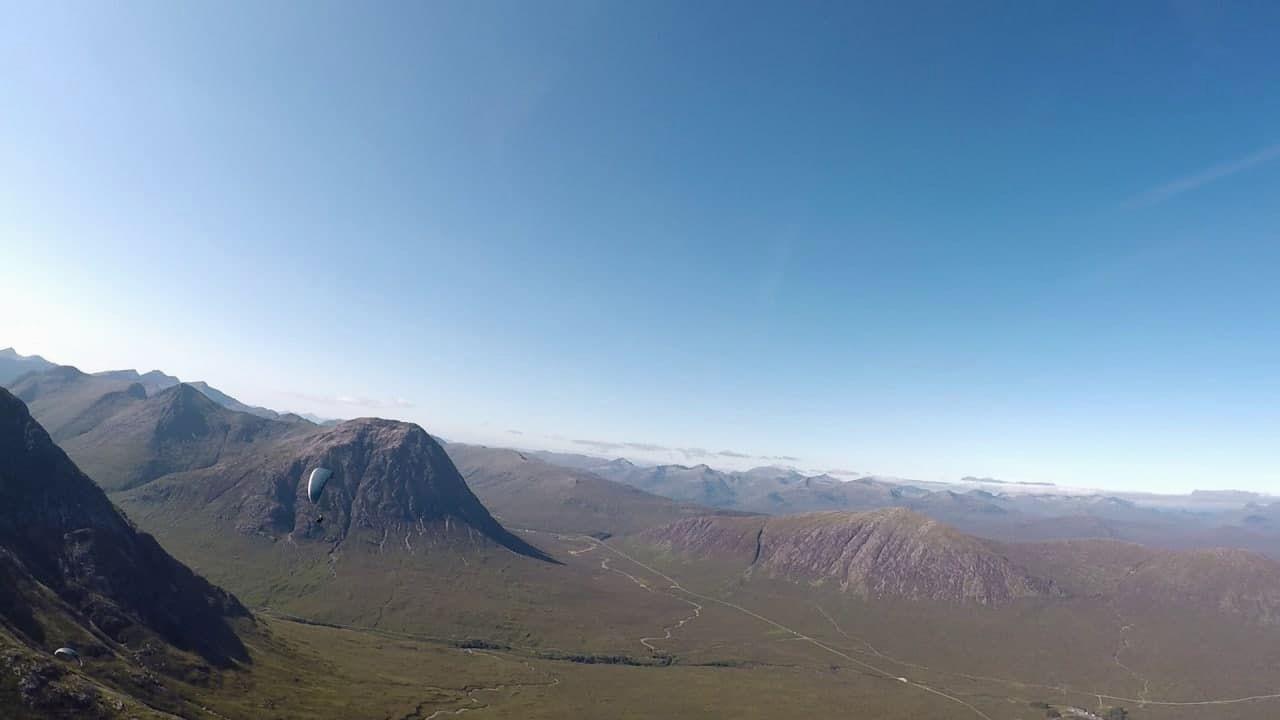 Wow! What an incredible day out! What a totally crazy and surreal sport!! How is it even possible?!?

Esteemed Wingbeaters Dudley, Rob, Tommy, Fred, Jamie, Simon and some novice newbie to the sport called Michael (me) headed to Glencoe for what turned out to be a stunning day in the azure blue skies above Rannoch Moor. Conditions were amazing with lift to be found all over the place.

I had no particular expectations for the day. I’m a beginner. But I’d been following the wingbeat chat on the group and the weather forecast and had managed a couple of very enjoyable trips to the Pentlands with Andrei over the past week. So I had an idea that the weather was pretty conducive for good flying at the moment. But I had never flown in the highlands, so this was a whole new thing. Turned out to be a day of many ‘Firsts’ for me.

With Dudley and Tommy starting out from further south, a hugely convenient 8:30am pick up for me and Rob in Stow got it all underway with lots of cheery flying related chat on the road up. I soon realised that within the car was a veritable gold mine of paragliding knowledge and experience. I could listen to this all day, although at one point I started to feel a bit sorry for them with my barrage of flying questions. One particular bit of advice about pulling hard on the breaks if the glider dives in front of you was to prove very useful just a few hours later…

We arrived and after a bit of repacking and lift pass buying we were off up the mountain. I was keen just to fly back down to the car park. Although looking up at the take off wasn’t helping my nerves any. The take off was above a cliff! I didn’t know I had signed up for that! Rob kindly and gentle explained that the idea was to be fully flying before getting near the crags, and this made me feel a bit better.

1st go: Fred introduced himself and did his reassuring pep talk, which was gratefully received. Ok – to fly down. Slight gust, glider up, turn round, run. I was off. I hadn’t fallen down the cliff - phew! But Geeze it’s high! I turned right along the face and then back left. As I continued the vario beeped encouragingly and I just seemed to be going up! And up! I was above the hill now, so why not try a wee turn. It worked! Yay. Keep going. My first thermal! After 40 mins or so of such nerve-wracking excitement there were a few more people in the air and thought I’d try and fly to the upper section of the mountain. But sinking air and not enough height meant that the slope arrived rather quicker than I was hoping. Better land, cripes. Nevermind. Bundle it up, back to the start. Most wingbeaters were up and away by this time, with just Dudley still to take off.

2nd go: By sheer good fortune I managed to find a good thermal quite soon after take off. Left hand circles, and I was joined by professional looking flyer who I later found out was Jamie. After circling to above munro height, Jamie headed off in the direction of the Buchaille. I did a few more turns and thought, what the heck, let’s try that too and set off after him. We both encountered sinking air on the glide across Glen Etive and seeing someone very low near the base of the Buchaille, Jamie had second thoughts and headed back to the home hill. I continued for another few minutes until passed the River Etive and then though Jamie probably knew best and chased him back home. After playing there for a while and gaining some height I thought I would have another go at the main upper slope. With plenty of height, things seem promising. But then – Boom!
A rustle overhead.
A couple of seconds of weightlessness. The glider was in front of me. Noooo!
Remember the brakes!! An incredibly long eternity of 3 seconds later and it was all fine again. I’d had what Dudley told me later must have been a frontal collapse. Nothing much to worry about apparently but jings, it sent my already high heartrate into the stratosphere.

Rather shocked by the whole thing, I decided to abort the mission to get further away and headed back to try and land at the top again to collect myself. I had a look at the vario – 1hr 50mins in the air! Surely I could stay up for another 10 mins to get over 2 hours?! After a bit of back a forth I managed (for me) a controlled top landing after 2hr 5 mins. My first flight of over 2 hours! Only 1 week after my first 1 hour flight! And only about three weeks after finishing my CP! It was after 5pm by now and the messages started coming in that people were back at the car park. After having a sandwich, I calmed down a bit and took off on my own and headed back. I consciously took a moment to take in the scenery on the flight down this time. Beautiful. What a country to live in. We are privileged. Down safe, just what I’d set out to do the first time, all those hours before.

As you can probably tell from the above, I was all rather gripped by my own goings on and wasn’t too sure what everyone else was up too. But on return to the carpark everyone reported a great day. Dudley seemed particularly delighted with his 3 hour (!) flight. Rob had paid the Buchaille a cheeky visit and thermalled up beside the crags there. Yikes. Tommy was being modest but spend much of the day ‘Top of the stack’ according to the others. Experienced Wingbeaters all made it up to around 4 thousand feet where they hit the inversion (warm air above, right…?) and reported enjoyable thermalling and spectacular views from all angles.
A couple of very welcome stops enroute home: one for a chippy and one for some slightly stronger refreshments rounded off a perfect day.

I’ve been in a bit of a daydream about the whole day ever since and I find myself staring off into space, reliving the moments when I really should be doing something useful! I’m indebted to you all for the support and encouragement on my wingbeat debut. Thanks especially to Dudley for taking us all up in the ‘beast’. Hopefully see you all soon on a smaller hill…I can’t wait for my next Wingbeat adventure!!