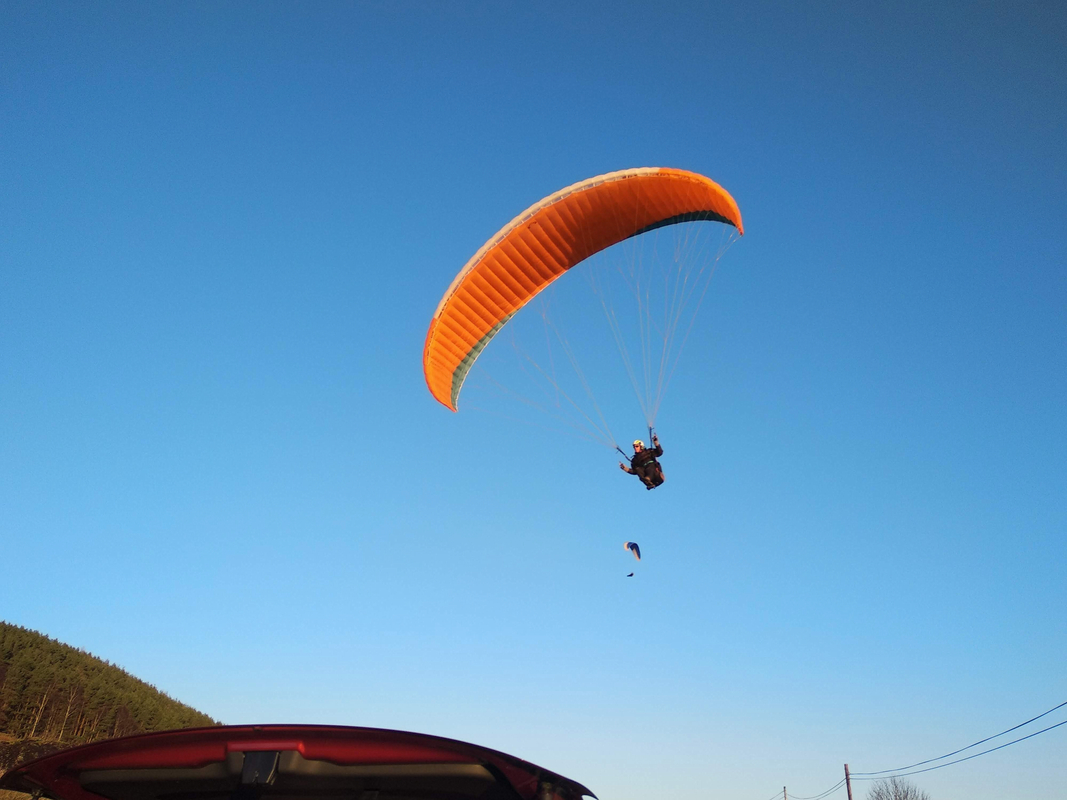 The end of another year , and after a period of wet and windy horribleniss a flying day appears in our hungry laps.

We could see this day developing a few days before and we have a grand plan to have a day out at Tinto . For me it's all just too much as I have another wing , a used Advance Epsilon 8 , but it's new too me and I am very keen to fly it.

The night before Fred drops the bomb that it might be too windy at Tinto......Christmas is ruined.

Dudley and Gerald spend hours checking all the current weather and decide Fred is maybe right.....and demand another plan. Derek Traynor pops up briefly to politely point out that Tinto is in Bandit county and we might never be seen ever again if we go there.

Anyway we decide to stay local in Ettrick and go to Blackknowe Head. Dudley and myself are there first and set of along the track with a plan to attack the shallow part of the hill. We used to just blast up the steep part but the years have been hard on us.

Arriving on top to find a very light breeze. Alex the racing leopard is hot on our heels and is only a few minutes behind.

Time is now around 11.45 am and its slowly picking up too almost soarable. Before long we are flying across the gulley back and forward feeling it out. Soon it's easy to stay up.

Another head appears coming up the Hill...its The grand master himself. Dave Lyal is on the hill.  He sets up and of he goes . Jamie has also turned up with his son Ruairi...he is having a tandem flight.

It is now feeling stronger and it's probably a good move to keep away from the top . Pretty snappy when launching and not so easy to top land , I am thinking it's going to blow out. But it settles down to perfect and we are soon exploring the ridge. A few of us push as far west as possible and even a bit further as we cruise into another bowl. It's working well and we stay along there for ages

We eventually make our way back to Blackknowe and land on the top. Its dropping back now , the day is getting on . Lots of launches and landings and walking about with the wings. Stephen appears and we all in our own time fly down.

I fly straight out and cross the valley to the farm on the other side to test the Epsilon..I really like its performance and feel good flying it. So it's back across to Blackknowe and landing beside the cars . The others are not far behind. Dave and Jamie had landed a bit before us but they have stayed around to take it all in.

It was such a perfect day really. Dudley, Dave and myself ended up at the Gordon arms for a celebration drink. It was actually a special moment for me as we three met up a long time ago ..training with Joe Campion when Wingbeat was a school. Seems like yesterday.

We three only had one apprentice "Rob Beattie ". He turned out to be pretty good too......

When we left the hotel the light outside at dusk was wonderous.

As I said earlier....a perfect day.