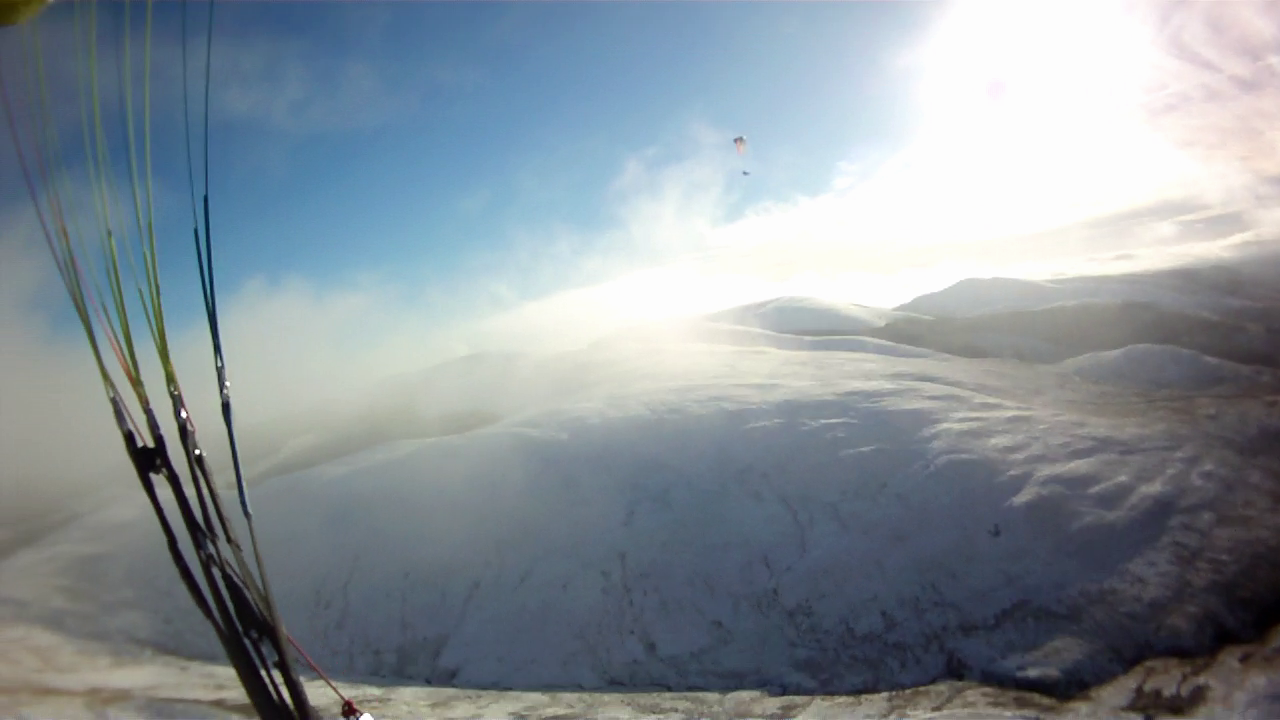 Woke up this morning to minus 8 and blue skys, fantastic. Chris came round to the house for 10 am, and after a chat about sites we decided to go up onto Bodsbeck despite the wind forcast telling us it was going s/w. There is a face that takes this direction but its really best in a N/W and is great in a west too. So we set off.

The walk up through the trees was easy but once on the open moor there was a fair depth of snow which made it a little bit tougher going. We still made the top of Bodsbeck in 1hour 10 min, not bad at all.

Fantastic views all round. Across to the Solway and Dumfries right round to Carlisle there was a low layer of cloud covering even the sea, it could only be a few hundred feet deep.

Wind on top was west. We had some coffee before setting up. Odd bits of cloud could be seen forming at times just above the top and it appeared to not be hanging around and soon we were enveloped but it soon passed by.

The plan was to fly out and round into the pass into Ettrick and land there. So it was now blue again with odd wisps forming and we launched. It was better than I expected with plenty of lift even way out from the face. We boated around for a while and I was aware of wave bars forming to the north and actually touching the tops so I was a bit wary. It was pretty lifty.

I decided after a while to go through the pass and check it out, 50 km ground speed. I turned back into wind a few times to check I could still go forward, it was fine so I went right back to the landing place with good height, it was fine so I bolted onto the sw face and hugged in tight scratching round onto the west face again lifting all the time. We really should use this face more often guys, its really good.

So another boat around before the wave started to melt my brain. So it was time to go through the pass again for a landing. Arrived with height so I spiralled it off. Chris landed beside me 2 min later.

Elation. Another small adventure. And I had Logans video camera on.