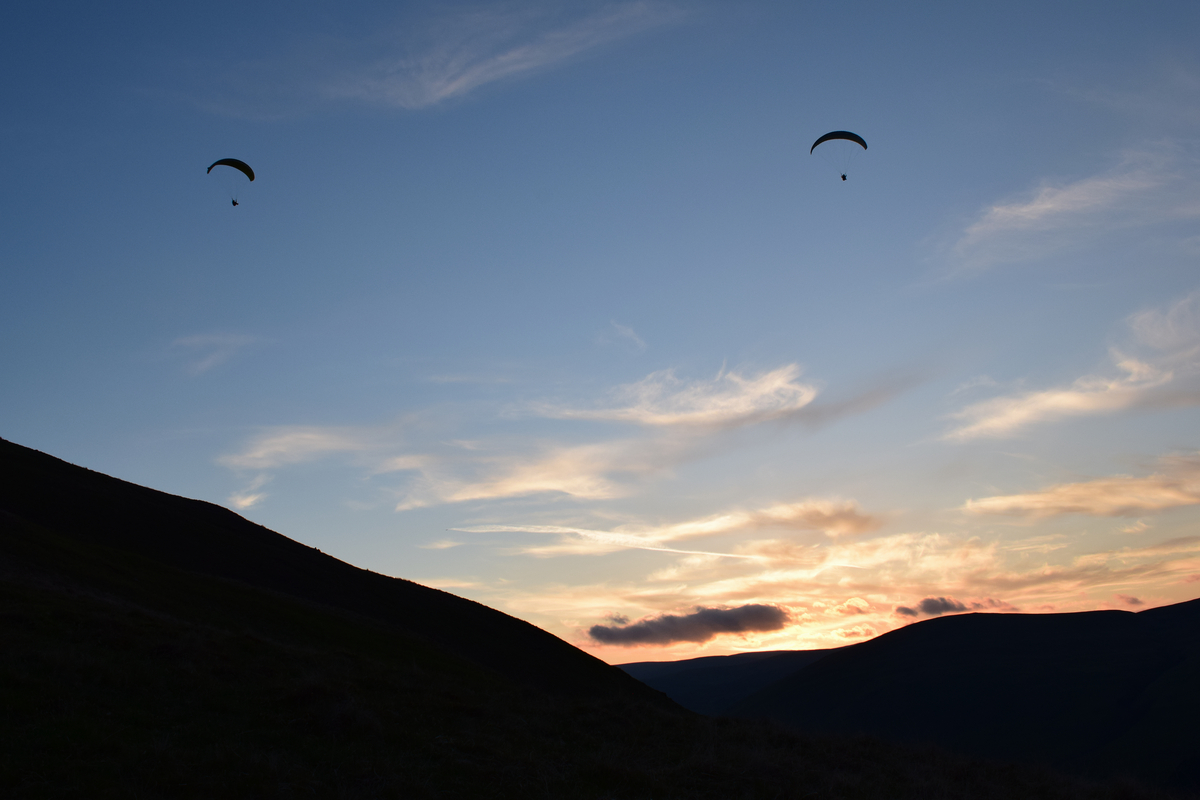 Wind. Lots of it. All from the East or North east. Do people not understand that it's not a great day if it's 27deg but bl**dy windy?

Got lots on this week but thought there was a chance of some flying before it got dark. At this time of year its about 10pm so there is plenty of scope for evening flying if you are not in too much of a hurry.

Tue was a tad windy but I was convinced that 8.30 ish the wind would settle a bit and we could get a flight in at bridgend. Tommy seemed to have put his sabbatical on hold to come out. Mark from Hawick was also over and we had a plan to get a flight in on the tandem.

Not knowing Mark I wasn't sure how quickly we would get up the hill. Turns out he's a super fit kayaker / runner so we headed up in superfast time. Only downside was it was a tad windy as we were on take off just before 8. No problem - lots of chat. There are worse places to spend an evening.

Not long after 8.30 things were starting to calm down. Several lenticulars to the west then more to the east were not to welcome. However we didn't really feel any noticable effects on the ground or in the air.

Tommy was off first. Playing about a bit. ground skimming, kiting etc (wouldn't say showing off as it's what he normally does ;-) ) Then we got set up with the Tandem. Nice easy take off and we were scratching along the hill. More lift to the megget end of the hill. Mark got a good view of part of the megget water he paddles occasionally.

A few strong bits came through at times - not sure if they were gust or wave effects. We made it a wee bit over the hill (50ft above takeoff is easy at bridgend but much higher is always a struggle!) and there was a bit more breeze with height. nothing unmanagable but good to keep an eye on it.

Soared about for a wee bit then spotted Tommy flying down. Got quite nervous when Mark got his camera out. Not sure phones survive a thousand foot fall! couple of wee wing-unders then down for an ok landing.

Mark seemed to enjoy the flight and will see if we can get another one sorted out at some point where we get a bit higher above the hill.

Home by 11! still light ish - really need to get some more evening flying in before the nights start drawing in again!