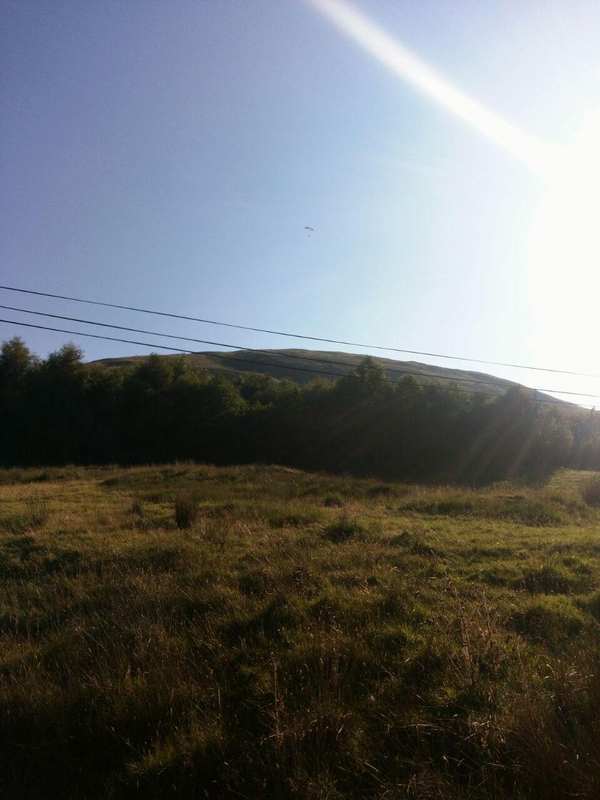 North. West. East. South. All directions that seemed to be popping up on the met office observations page for Drumalbin, Charterhall and Eskdalemuir.

Things seemed to settle down a bit by late afternoon to a bit eastish of north so Dave, Derek, Stephen, Clare and me headed to Bridgend.

Dave was first on site followed by Derek. By the time me and Clare arrived for a tandem flight Derek was cruising round the sky on his BGD Cure (a very nice looking glider and very floaty!). Dave launched while we were walking up. Slightly delayed due to a missing nipple? Probably misheard that!

We got to the top and set up with the tandem. Dave and Derek landed to say hi and say conditions were lovely but getting lighter. no pressure for a tandem launch.. honest.

Practice launch - glider came up but aborted the run. It was more to give Clare an idea about how it feels. Dave and Derek then sorted us out and pulled the glider back into shape. Second launch - glider came up nicely.. run run RUN! off we went. It felt like a wee bit of a run but we got in the air. Just as the gust had passed through so we were soaring down the hill. About halfway down we maintained for a minute or 3. maybe a bit of height gained but then headed down to land.

Stephen, Derek and Dave all managed another fly about before the sky clouded in and they headed down to land.  Two of the landings could have been better. tandem landed ok. So did Derek....

A nice fly down on the tandem. I think Clare might be up for another one at some point so can't have been too bad.