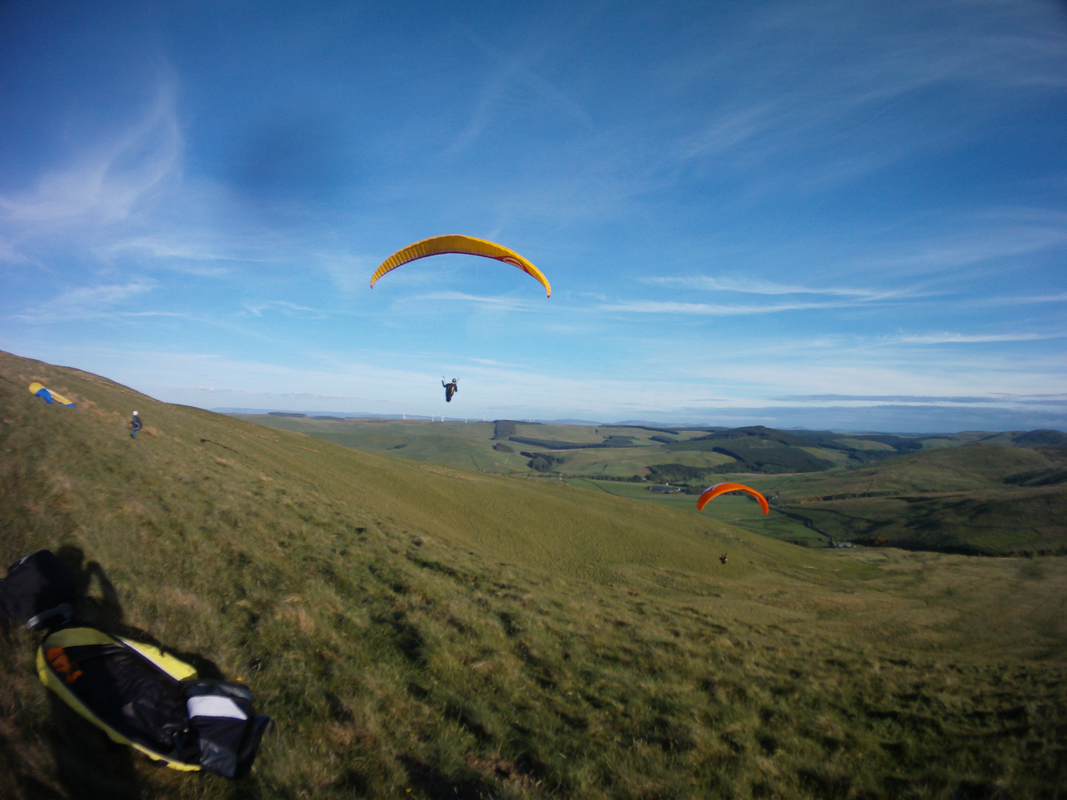 Rob and Fred saw the rasp forecast and headed north but for those of us that were stuck in work (+ Mr Lyal) an evening flyabout at witchieknowe looked on the cards.

I don't normally get out to play on a wednesday night these days as Mia is either at Uni or studying but the kids were off school on thu/fri so could cope with a late night. They didn't have much choice in coming with but brought lightstrike guns (a bit like laser tag) and offered to put a target on my harness to give them something to do while I flew.

I put the tandem in the car along with the kids harness just in case it got a tad light for the solo and one Ruairi was up for it.

The drive from lockerbie to ettrickbridge is not the straightest of roads and I sometimes feel like I'm rally driving especially if it's flyable! Took it easy tonight to try get the boys onto the hill without getting carsick. It sort off worked. Finlay was feeling a bit funny by blacknowehead so even though we were close I took things steady.

Got to the bottom of the swire road and spotted 4 gliders in the air. Both boys stopped complaining and wanted me to go faster. They have seen people flying before but I wasn't complaining.

Got to the top just after 7. Tommy, DaveL DaveH and Derek in the air with ChrisMcC heading to take off. Seemed quite strong at times. no problems launching or staying up but maybe a tad strong for a tandem flight with a light passenger.

Got my UP Lhotse out of the bag and started corralling the boys over to take off in the bowl. Conditions seemed to be getting lighter. Back to the car - tandem bits + two happy kids over to the hill.

Ruairi was first up - nice take off. Tommy helped R get into the harness (less of a wedgy that way) and we had a nice soaring flight. top landed and got Finlay set up for his first ever paragliding flight. He was quite excited. I was a bit nervous but launch was fine. Tommy hoiked him into the harness and we were off.

It had gotten lighter but so had my passenger so we soared about then floated down to the car. Ruairi had the longer flight but had to walk back to the car so was a bit annoyed.

Both boys enjoyed their flight and have threatened to come out every time with me from now on. Should be ok in the holidays but not on a school night.

I think everyone had a good flight (or two) and I think it may have been flyable still as I left. The boys were getting tired. both were asleep by eskdalemuir on the way home.

Pictures by Ruairi and Finlay.