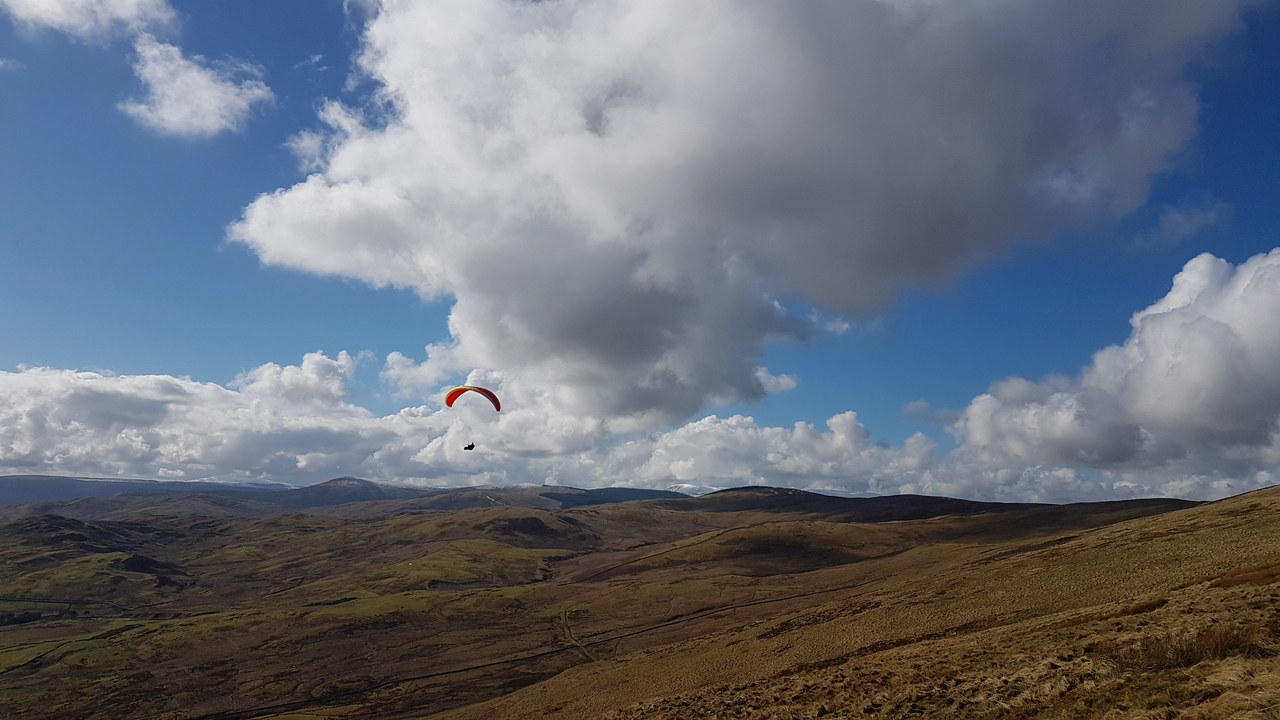 A hint of a flyable forecast.  On a weekend. It must be spring?

Light wind.  South going East so a basic plan was formed to take a look at Blackknowe head Sunday morning.
11pm sat night rain. And a wee tad more overnight.
7am Sunday morning the rain had stopped and there was a hint of things clearing up in Lockerbie. By 9 we had blue sky with some cumulus so in an attempt (maybe not too hopeful) I jumped in the car and headed up to Tommy's place.

It felt like driving into the weather.  Dark skies in places but there was a hint of things lifting.
The rain shower in the Ettrick Valley didn't dampen things too much..
Rob was already there.  Logan appeared too.  Much pondering of the weather.  Rain out the window. Clouds lifting.  Sunshine…
Go go go.  Blackknowe head here we come.

Fred was already up on the hill.

Logan stayed down the bottom and played with his new drone.  It looked pretty good as we walked up - we’ll post the footage if it's any good.

Wind was south and there was a wee bit of thermals kicking through.

Rob and Fred had a wee flight.  There may even have been a 360 or two.

Tommy,  DaveH and I watched.  Then got ready.

Unfortunately that was it for the southerly side if the hill.  Slight breeze eventually started coming over from the east.  (just as AlexM) made it to take off.

Several short flights later things hadn't improved. Those that had flown all had a wee walk back up.  Quite hot work for March.  Some snow in sheltered bits so a couple of snowballs made an appearance.

The East face looks quite promising. Not huge but a good alternative to Bridgend if numbers are small.

As nothing was happening and the East slope was now in shade we started looking at a fly down.  Tommy was off first.  Not a lot of up.  I headed next.  Beeep .  Beeeeeep. So started working it.  Rob and the rest joined in.  Suddenly the East face had 5 gliders up working the lift.  Most made it above take off but the lift was short lived.  A  procession of gliders then headed down to land on the dry bit at the side of the hill.

A wee poke in alex’alerts van and a dram far Fred for those that do then a short debrief and home.

A nice day out.  Nice to fly a new site (East face) and good to get the feet off the ground.