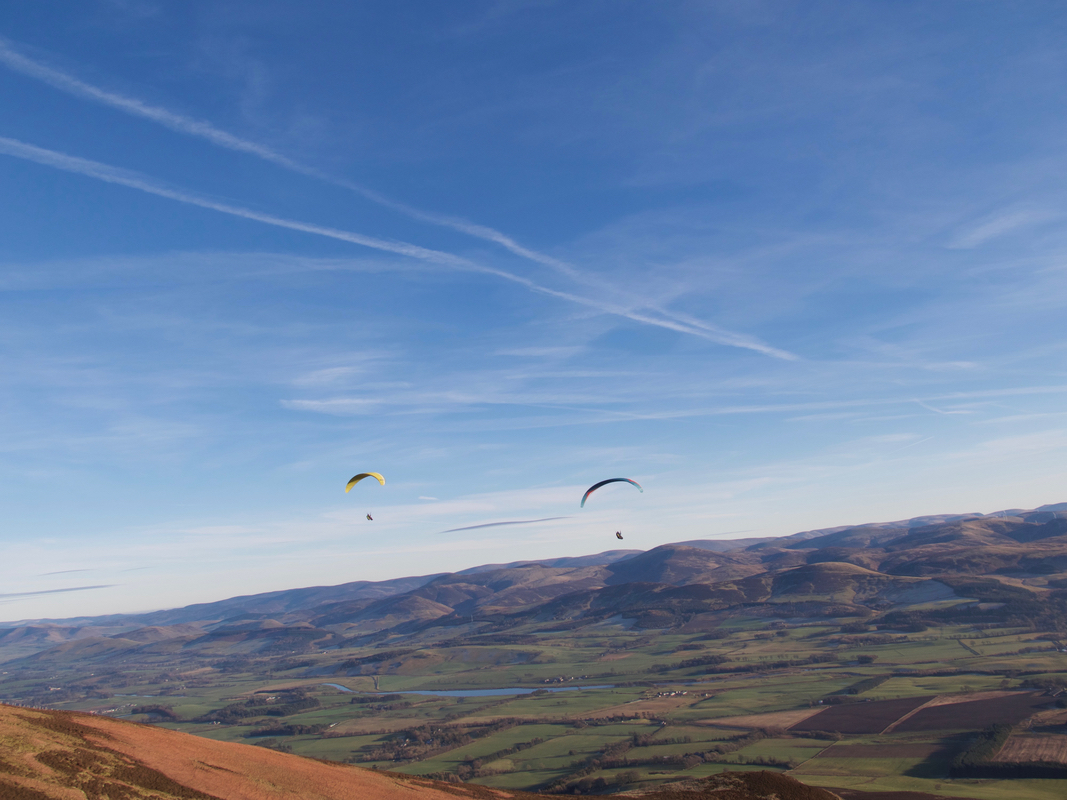 To paraphrase Arnie. I am back. End of last year was shit, quite literally, as a bug arsed my digestive tract. Went to visit a slightly new age dietitian lady at Napier center in Edinburgh and she seems to have got me sorted out.  I used to be a sceptic about these alternative therapy things, but after the hypnotherapist sorted out my smoking I am a convert. I suppose it's just 60% common sense 40% headology but it works. Anyway, I like telling people I am going to see my hypnotherapist / dietitian. It's small thing. But it amuses me.

Cutting to the chase, the flying was great. We (me & Tommy) could not have done better. After looking at the skewt on rasp we decided on Tinto because there seemed to be a fairly big gradient with a good wind at 2000 feet. We had considered White Combe with light kit but it did not seem quite perfect for that. After the usual meet up and Innerleithen with Dave H and Andrew we proceeded in the direction of Tinto.

On getting to the top of Green Hill, there was almost but not quite enough wind to soar. That suckerred Dave and Andrew into getting the kit out. Taking note of Fred's experience on the Ochils I persuaded Tommy to walk to big Tinto. Good decision. When we got there, the wind was blowing pretty sharply. Tommy took of and managed to maintain. I followed shortly after and it was great.

Little bullets of thermals coming of the scree, and it was easy to zip from one to the next with the Carrera and do half a turn in them before zipping to the next. We both flew well and it was not easy. We were often enough flying about whilst many of the others were slogging back up the scree slope. I like that kind of air. I always imagine I am like a we troot swimming through a swirly, switching rapid. It's pure joy. Although I think it's possibly best to keep in mind you are whizzing along at 50kph just above rocks held aloft by cloth and silly string.

Sean turned up a bit later when it had picked up and got some good flying. He was looking smooth as ever. Dave, Andrew and Jamie did not get much flying. But it was that nice a late winter day, it really did not matter. It was enough just to be there. We all even managed an implausible glide back to the car at the end of the day. It's good to be back.